In honor of the 150th anniversary of the Civil War battle in Gettysburg Pa., (being commemorated this week) I have decided to repost some of my blogs about our experiences living in Gettysburg last summer and fall.  Lisa and I hope you enjoy them.

This post is for all the history buffs out there.  And for those who are not – maybe you should read this anyway.

Since being here in Gettysburg (by the way – pronounced in a way that would rhyme with “Lettuceburg” by all the locals) I have toured many of the battle sites and key locations of the war.  Today I decided to take a bottle of water and trek across the field where the famous charge of July 3, 1863 took place.  Wow!

The open field that separated the Confederates on Seminary Ridge from the Union Army on Cemetary Ridge is less than a mile in distance.  It took me about twenty minutes to walk from the seminary ridge tree line to the famous “angle” of the battlefield which is considered the southern “high water mark”.

I began my hike from the base of the Virgina monument featuring Robert E. Lee sitting on his horse, Traveler, and surveying the battlefield.  From the Confederate starting point, which was west of the battlefield, the ground is rather flat with only a slight incline to negotiate.  A cleared path makes it easier for tourists to walk across the field but I noticed the high, thick weeds all around and at one point stepped into the thick brush just to get a sense of how it difficult it may have been to move through.  Several times I was stuck with briars and tripped on the thick weeds.  Needless to say those who crossed the field that day did not have a smooth area in which to march and just getting through the thick weeds would have been exhausting.  When I reached the “Emmittsburg” Road and its rail fenced border, I noticed the incline rose drastically and it did not take me long to be out of breath trying to cross the final one hundred yards.  Many scholars believe that the fence along that road cost the confederates a massive loss of life as soldiers tried to climb over while being shelled.  One tour guide I spoke to said an eight foot section of that original rail fence was saved and contains over a thousand shell casings embedded in the wood. That final 75 yards was an uphill struggle for me.

As I got closer to the Union position it was easy to see the superior Union vantage point. To say that the Union held the high ground is certainly true.  I found myself amazed that any of the Confederate soldiers actually made it to the Union side with such a disadvantage.  I met up with another gentleman who like me was walking across the field and he too was surprised at the steep incline – something you don’t notice standing on either ridge.  I joked that it would have been easier for the Union to attack since they would have been going down hill.

I finally reached the famous “angle” where the hand to hand fighting took place. This is simply a spot where the rock walls intersect at a ninety degree angle.   At one point I had to wipe sweat from my eyes and could only imagine how hot it was for the soldiers carrying guns and ammunition – if they were still alive at that point.

I have read that there were relatively few casualties as a result of bayonet attacks.  The hand to hand combat resulted in more men being wounded or killed due to blunt force trauma than that of the bayonet.  Some suggest as brutal as the fighting became – it was still difficult to run a knife into the enemy. (If anyone can verify or disclaim that – please let me know.  I am going to ask a park ranger about that as soon as possible.)  It is interesting that the monument depicting the hand to hand combat is that of a soldier raising the butt of his gun to bludgeon his enemy – not the blade of his bayonet.  In fact this image will soon be seen on the new quarters being minted to celebrate our national parks.  Gettysburg’s will be depicted with this image (seen below). 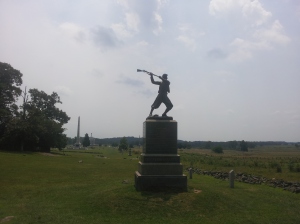 Finally I stood on Cemetery Ridge and looked back over the field I had crossed.  Next year they will celebrate the 150th anniversary of the battle and they are already working to make the area as authentic as possible – even planting crops that were indicative of that time and place.  Some of you may be interested in knowing that Gettysburg relies on a large contingent of volunteers to do some of the clean up and maintenance work here at the park.  They use volunteers to clean all the 1300 monuments here as well as do some painting and cleaning and are always needing more help.  Before we leave here – I hope to volunteer some of my time – I have plenty of it.

In 1913 Gettysburg celebrated the 50th anniversary of the battle and several survivors of the battle were in attendance.  The Confederate veterans who were physically able re-enacted their “Pickett’s Charge” – only this time as old men they did so much slower and with less gusto.  When they reached the Union line – they reached across the stone wall where many of their fellow soldiers had died those many years ago and shook hands with veteran Union soldiers.  For many it brought closure to what must have been the most difficult moment in their lives.

I walked that same path today.  I don’t care if you like history or not – how cool is that?