Life is really about people.  When Lisa and I talk about things we have enjoyed about our traveling here in Pennsylvania it usually centers around people we have met.  Although we live on the back side of ‘little round top’ here in Gettysburg and have been able to visit DC, Baltimore, Amish country of Lancaster, and other places in our vicinity, it is really the people that we have met that make our trips memorable.

Too often I am hesitant to strike up conversations with people – thinking they are probably not interested in talking to me and so I usually leave them alone.  To be honest I am sometimes hesitant because I’m afraid of what I’ll find.  Some of the folks look a little different, talk a little different and I’m still learning what is appropriate in terms of social interaction.  Who knows – I may be breaking some local taboo by talking to strangers.  But of late I have made a point of just saying something – starting some kind of conversation – taking a chance.  To date I have not had one person say “shut up”, “leave me alone”, “the moon is on jupiter,” or just haul off and punch me in the mouth for invading their solitude. Like wise Lisa, who is much more outgoing than I am, has also not met anyone disagreeable.  Everyone has been very nice.   I realize that most people are like me – shy, afraid to intrude, and simply of the opinion no one wants to talk but also like me probably just waiting for an opportunity to talk to someone.  There is a lot of people in our world – some say our population is growing out of control.  And yet with all the people in the world – life can be isolated and lonely for so many.  I miss my friends and family and I miss interaction with them.  So we have decided to talk to people – just start conversations and see what will happen.   Here are some stories.

We met a couple sitting in the row in front of us at Camden Yards in Baltimore during the Orioles and Tigers game.  I had noticed them soon after we were seated and my initial thought was to try and not disturb their space or conversation.  They were black and in my mind (I’m sorry to admit this) thinking they were Baltimore street tough thugs.  Lisa and I could not help but laugh at the way they interracted with each other during the game and finally I broke 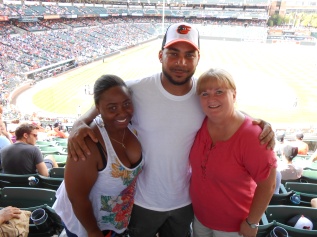 the ice by offering help to the woman who had been taking quite a bit of teasing from the man she was with – either her boyfriend or husband.  She was yelling at the players things that did not seem to fit proper professional baseball yelling.  For example she was screaming for the hitters to “Keep their eyes on the ball.”  Her husband gave her a funny look and told her that was something you say at little league games.  I took a chance and leaned over into their row and said in my natural Kentuckyese, “Honey you just keep on yelling whatever you want.”  They both laughed and before long we were talking to each other.  We told them we were from Kentucky and learned they were natives of Baltimore.  We talked the rest of the game and Lisa even wanted a picture with them before we left.  All of my preconceived notions of these people melted away.  I felt terrible for my prejudice but so glad I took a chance and talked to them.  They were nice people.

This past weekend I told a man to sit down and “take the load off” while I took a break from shopping in Lancaster.  He, like myself, looked lost while his wife shopped in one of those ladies only stores and so I offered him part of my park bench.  Never got his name but he said he was from Maryland.  He then asked if we had eaten at a place called “‘Good and Plenty”.  Having never heard of it – he explained it was an Amish restaurant with family style seating and all the food you could put away.  I thanked him for the advise.  Our encounter did not last more than two minutes.  But I could tell he was a nice person.

As we were leaving Lancaster I remembered my brief conversation with the man from Maryland and told Lisa about “Good and Plenty”.  We decided to give it a try and what we discovered was some of the best food we have had since we have been here.  But that is not what we will remember.  It was true that the food was outstanding but it also was true about the family style seating.  At first my old instincts kicked in – you know the one that really wanted to ask our waitress, “Can’t we have a private booth away from all these strange people?”  But we were seated and forced to introduce ourselves to a man

Good and Plenty
Where the food is good and friends are plenty!!

and his daughter who, we learned, were from the Bronx and they were in Lancaster for a short vacation together.  She was a graduate of Syracuse University – her father was a preacher and we quickly noticed that he was wearing a hearing aid and struggling to hear things being said.  Lisa, sitting next to him, spoke louder for him so he could join in our conversation.   We asked about New York and the daughter said we really needed to go there and see “The Lion King” on Broadway.  They prayed over their meal and Lisa told the father she appreciated their display of faith.  The father told us he was a lutheran preacher.  We were southern baptist – but we loved the same God.  We connected.  Soon another family was seated on the other end of the table and we learned that the father owned a Corvette and was fascinated to hear we lived near the Corvette plant in Bowling Green.  One of his sons and his fiancee sat next to me and we learned they were to be married on September 22nd – my birthday.  I told him it was also the birthday of Bilbo Baggins and he laughed while his fiancee asked, “Who is Bilbo Baggins?” He would have to explain that to her later.  They also loved Disney.  We had an incredible connection with all of them.  Whoever thought of this style restaurant was a genius.  You cannot sit a table passing food from one to another without talking to them.  It was a great way to meet people and the people we met at “Good and Plenty” were nice people.

We arrived back at our campsite one day to find a huge RV had parked next to ours and I finally initiated a conversation with the owner.  He was from Arizona and he told me he had driven 3,000 miles.  He had a trailer carrying his Harley motorcycle and said he nearly crashed trying to climb a little hill behind his RV.  He asked if he could drive his motorcycle near our trailer to avoid the hill and I said absolutely.  He was obviously by himself.  I did not see him again for a couple of days and noticed one morning he was packing up to leave.  I offered to help him get his motorcycle trailer hooked up and he was extremely grateful for what little assistance I was able to offer.  I felt fortunate that Lisa and I, at least, had each other here – this man was alone but he was a nice person.

The world is full of bad people.  Colorado has discovered that awful truth on more than one occassion.  Penn State is reeling from the conduct of really bad people.  In the local news I have read of crimes being committed by mean, desperate people here in Gettysburg and the surrounding area.  Someday Lisa and I will probably encounter bad people.  But until that happens and, hopefully, even after it does, I’m going to keep talking to them.  Because I really like talking to nice people and I’ll take my chances.