My final repost of an article written while living in Gettysburg last year.

Our campsite is approximately 2.5 miles from the very site of Abraham Lincoln’s Gettysburg Address.  I have visited the Soldier National Cemetery on numerous occasions.  Here are some of my observations.

There are some who have suggested that Abraham Lincoln could have been remembered for his literary prowess in the same category as a Mark Twain had he chosen to be a writer rather than the great emancipator President that he became.  Walking around the Gettysburg battlefield I have had to question if this place would have been so revered had it not been for the 272 word speech Lincoln gave to dedicate the cemetery.  I just can’t get enough of that speech. 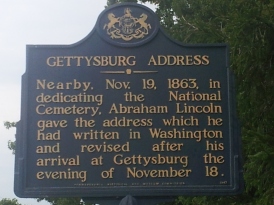 As I have listened to many of the speeches during the Republican National Convention and will hear more in the weeks to come during this election season, I marvel even more at the impact this two-minute speech made in our history.  It seems to me that speakers today could learn some lessons from Lincoln if for no other reason than for it’s brevity.  Long winded sermons and speeches tend to frustrate me more than inspire.  My ability to stay with someone longer than fifteen minutes is my own fault – though I doubt I have attention deficit disorder.  My problem is subject deficit disorder.  If you can’t get your point across in under fifteen minutes – times up!  At church when I see the outline has more than four points – it’s going to be a struggle for me.  I want to scream to every student, pastor, and teacher who stands before an audience – arguably the greatest speech ever made took TWO MINUTES.

Perhaps nothing (in my mind) was more relevant in Lincoln’s speech than the idea of “new birth of freedom”.  As the nation was coming apart at the seams, Lincoln realized the pain and carnage of the war could result in either perishing from the earth a government by the people or it would result in an even greater, stronger union.  He may have been the only one that day in November 1863 to understand the bigger picture of the war.  And it may have been lost on most what he meant by “new birth”.

Let me try to explain how I understand that.  Lisa and I have had a wonderful marriage.  It started out with all the pomp and circumstance of a grand wedding and moved through that first year with only a few rough patches.  But over time we began to have some disagreements.  She may have wanted one thing – I may have wanted another.  Some of those disagreements turned into full-blown fights – all of which we finally worked through.  But our marriage would take a drastic turn in 1986.  In January of that year she gave birth to our oldest child, Justin.  Her labor through the night was unbearable and after about twelve hours the doctors finally decided to do a C-section.  At 7:28 the following morning – Justin was born.  The long struggle through the previous night had bonded us together as a couple like never before.  Together we held our child for the first time with a renewed committment to each other and our marriage.  Justin would be joined by a daughter, Heather,  two years later and our bond became that much stronger.

Lisa and I have a strong marriage because we have withstood many, many challenges.  Similar challenges have doomed many marriages into divorce and we are enjoying the benefit of a loving marriage that has now lasted almost thirty years.

Perhaps now you can understand why I marvel at Abraham Lincoln’s Gettysburg Address.  He understood the struggle of exercising freedom and was able to capture the hope of a brighter future when that awful war would be done and a real ‘United’ States could be born.  What a brilliant way to understand the “struggle” he spoke of in that speech and Lincoln knew that the great experiment of a government “by the people” would “perish from the earth” if that new birth was not realized.

Postscript:  I have walked through the Soldiers National Cemetery numerous times and have tried to figure out where Lincoln was standing when the speech was given.  The National Soldiers Monument is assumed to be the spot.  Since the podium was dismantled immediately after the ceremony – there is no recorded history of the exact location.  There are several possibilities.

1.  When you enter the cemetery from Taneytown Road you will notice immediately to your right the “Lincoln Address Memorial”.  (See photo below) 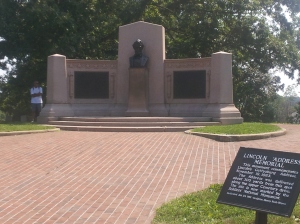 For some time I assumed this was the spot.  It is not.

2.  Directly across from this memorial is a podium that is currently being refurbished.  It has every indication that it would be a stage used on that day.  (See photo below) 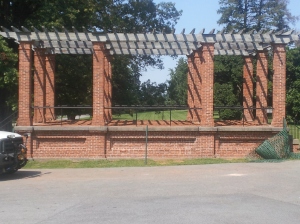 3.  The place most people think was the spot is marked by the grand “Soldier Memorial” located centrally in the cemetery and surrounded by fallen soldier gravestones.  The assumption is that the stage would have been located in this centralized spot.  (see photo below) 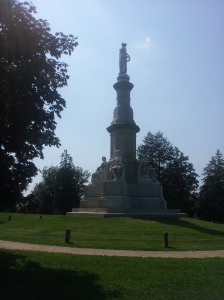 The problem with that theory is that graves were still being dug when Lincoln gave his speech four months after the battle.  So no – even this is not the spot.

So where did Lincoln give this speech?  I had to find out.  Finally a park ranger explained it all to me.  There were no photos of Lincoln giving his speech.  In fact his speech was so short the photographers did not have time to get set up to take pictures.  There is a picture, however,  that was taken immediately following his speech and experts have been able to determine the exact location of the podium based on landmarks in the background.  So are you ready to see the spot? 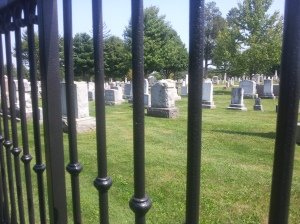 The Soldiers National Cemetery is bordered by the local Gettysburg cemetery called “Evergreen Cemetery”.  The fence that separates the two was actually the fence in front of the White House when Lincoln was President.  It was moved after the dedication.  The rough cut gravestone that is in the middle of the picture and is between the second and third bar from the right – is the spot.  You can see it without the bars blocking your view below. 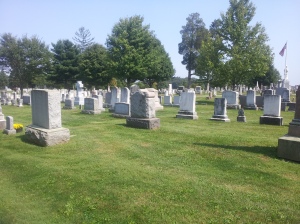 The exact spot is believed to be where that rough cut head stone is located in the very center of this picture which is actually in the “Evergreen Cemetery” approximately one hundred yards from the Soldiers National Monument.

And now you know the rest of the story.

2 thoughts on “A New Birth of Freedom”